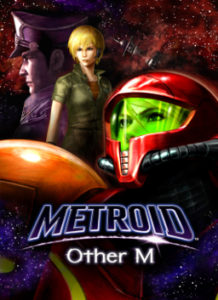 Metroid Other M made me want to become an activist. This game ranks with Dead or Alive Extreme Beach Volleyball for worst the portrayals of women in gaming. I’d been on a Metroid kick and decided to pick up one of the few Metroid games I had not played. The Metroid series were some of my favorite games growing up and I still enjoy them today. Samus Aran, a power suit wielding bounty hunter performing jobs for the Galactic Federation. Do I really need to say anything else? These games played like a dream and have become a staple in gaming history. I have fond memories of firing my plasma beam at evil space pirates while rolling around in the morph ball. As a sugar fueled child there wasn’t much more I could ask for. Samus was one of my heroes; my nights were filled with dreams of having an awesome power suit just like her. I wanted to save the galaxy from the evil Mother Brain and fly away in my ship. I will always cherish my fond memories of the classic Metroid games. I’m glad it wasn’t until I was in my mid 20’s that everything that had been accomplished with the character of Samus Aran was thrown out the window. Team Ninja managed to accomplish this task with the skid mark on the underpants of the Metroid series that is Metroid Other M.

There is a reason Samus is such an important character in gaming history. Like many of my peers, I played through the entire original Metroid game utterly ignorant to what was beneath the helmet of that power suit. It didn’t matter; all I cared about was searching for power ups and blasting the bad guys. Eventually I, like everyone else, discovered the face under the helmet belonged to a woman. By today’s standard this shouldn’t really make a difference. However when you consider that the only playable female protagonist prior to Samus was a ball gobbling yellow sphere with a red bow and lipstick, this was a pretty big deal. Samus was the gaming industry’s first strong female lead and, like a true bounty hunter, she was her own boss. Even as female protagonists have become more common in video games, Samus has remained one the strongest, most independent, characters in the history of all video games.

Out of the 11 total Metroid games I have played, Metroid Other M is the only one that I found myself actually yelling profanities at.

It is no stretch to say that Samus has done great things for the female role in video games.  There are no tiny scraps of armor that barely cover the naughty bits. She wears a logically designed protective suit of Power Armor. She single handedly defeats foes that greatly out number her. She’s a one woman army that knows exactly how to get the job done, her way. Out of the 11 total Metroid games I have played, Metroid Other M is the only one that I found myself actually yelling profanities at.

The game starts with an honestly exciting retelling of the last moments of Super Metroid. Samus then arrives back at a Federation station for a checkup on her power suit. I actually likes how the use of this as a nice tutorial. With her suit and health all checked out she cruises off in her signature ship where she soon picks up a distress signal from a “bottle ship.” We soon find the ship is a research vessel for the Federation, a sort of militaristic governing body. Once aboard, Samus quickly encounters a group of Federation soldiers we’re told she knows from her time with the Federation military. The Federation soldiers and she then proceed to split up to find the source of the distress signal, leaving Samus to work alone. Samus is no stranger to the lone wolf role. Samus knows how to kick butt and has amassed a plethora of tools and weapons to do so. It stands to reason that Samus will be the hero to save these Federation soldiers from certain doom. Then again reason and logic have no place in Metroid Other M.

Every character, from the very beginning,  appears to be from a middle school writing project.

Within the Metroid canon, Metroid Other M takes place just after the events of Super Metroid. This makes it the seventh game chronologically in the series. By this point Samus had defeated the space pirates, twice; defeated the threat of the parasitic Metroid Prime, thrice; fought off a host of competing bounty hunters and destroyed nearly every metroid in the galaxy. Samus Aran has seen some a lot. It stands to reason she is one of the most capable, independent, warriors in the galaxy. The Samus from Metroid Other M appears to be a completely different character. In fact every character, from the very beginning,  appears to be from a middle school writing project.  Each character perfectly fits into textbook molds. Everyone acts exactly how you would expect and never even dreams of venturing into original or unique territory. Characters die and you don’t care because they’re just talking puppets. They are uninteresting and illicit no emotional connection with the player.

We swiftly meet the generic “dark and mysterious” leader, Adam. He is the former superior officer to Samus during her time in the military. We know this because we’re told so in at least three painfully bad cut scenes. One of these cut scenes is literally, entirely about Samus giving a thumbs down to Adam while everyone else gives him a thumbs up. Samus has a rebellious teenager complex regarding Adam, and the developers take every chance to beat it into your head. It’s hard to tell why Samus even acts this way with Adam. The character has next to no lines and spends most of the game in a control room barking orders at Samus. The only purpose Adam serves is to mansplain Samus’ own suit to her at the worst possible times. This serves to be the most degrading aspects of the game.

Samus is the galaxy’s greatest hero. She’s proved time and time again, she doesn’t need anyone’s help to save the galaxy. Unless of course Adam is around apparently. Early on Adam asks Samus not to use the advanced features of her Power Suit because of variety of generic BS excuses. She obliges him and it makes sense. It’s a good idea to work with the Federation. As the game progresses Adam will “allow” Samus to use more of your suit’s abilities. It’s a good this he’s around to tell the little Samus how her suit works. At least she’s not in any danger of death without the use of these features. Except she is.  Samus is so dead set on not disobeying Adam that she will not use features of her suit that could save her life, because Adam hasn’t told her she can yet.

Samus had been dying from heat damage for literally hours and had the ability to prevent it the entire time!

There is a volcanic, lava filled section of the game, a common set piece in the Metroid series. Normally you eventually fight a boss that gives you the Varia suit, allowing you to survive extreme temperatures. Due to the linear nature of the Metroid Other M you are forced to enter this extremely hot volcanic area without the protection of the Varia suit. Series veterans might assume that you would have to muscle your way through the areas. You’ll be taking damage the entire way, until you got to a point where you find the Varia suit. You have to race through the volcano, taking so much damage from heat will likely kill you several times. Finally at the end Samus jumps out of the top of the volcano with a nice spinning jump. Then once she’s finally safe from the lava in the volcano, Adam chimes in on the radio. At least two hours into the high temperature area Adam says “Samus activate your suit’s Varia feature to protect you from the heat.” I…I was speechless… Samus had been dying from heat damage for literally hours and had the ability to prevent it the entire time! Samus was dying and she wouldn’t activate shielding to SAVE HER LIFE because Adam hadn’t approved it!

The cut-scenes just make everything worse. They are the worst examples of background exposition dumps. A poor attempt to add depth to the cast of flat characters. Samus explains every bit of the game’s story like a high school cheerleader reciting the Spark Notes for Twilight to a 4 year old.  Samus rambles on about her dry history with the cast of rigid characters. She’ll tell us how they served in the military together one of them always called her princess.. Where are these character outside of the cut-scenes? The only remarkable one is Anthony, simply because he shows up more. None of the character interaction relate to these stories we’re told. Metroid Other M continuously spews out entire characters’ history and profile, and then just leaves it behind.

Nothing will make the Samus of Metroid Other M a well written character but it doesn’t change the Samus from every other Metroid game.

Metroid Other M did not receive critical acclaim. Nearly every review of the game criticized the game for its poor story telling and misogynistic portrayal of Samus Aran. Samus was and, despite Other M’s best efforts, still is one of the best characters in video games, male or female. In an industry dominated my male heroes and overly sexualized female characters, Samus is a beacon of equality. She gets the job done, better than most. Most importantly she does it without needing someone to tell her how to. Metroid Other M really only qualifies as a Metroid game in name alone. The classic Metroid formula put you in hostile worlds where pretty much everything wanted you dead . It was is up to Samus’ skills and upgrades to stay alive and defeat the boss. You traveled through a rich world that showed the narrative of the game without the main character speaking more than a paragraph of dialogue. Samus earned her upgrades by defeating enormous foes using everything at her disposal. Nothing will make the Samus of Metroid Other M a well written character but it doesn’t change the Samus from every other Metroid game. We’ll just ignore Metroid Fusion here. As the video game industry moves towards a more gender neutral stance in character design, I look back fondly at the progress classic Metroid games started and bury the brain damaged caused by Metroid Other M.